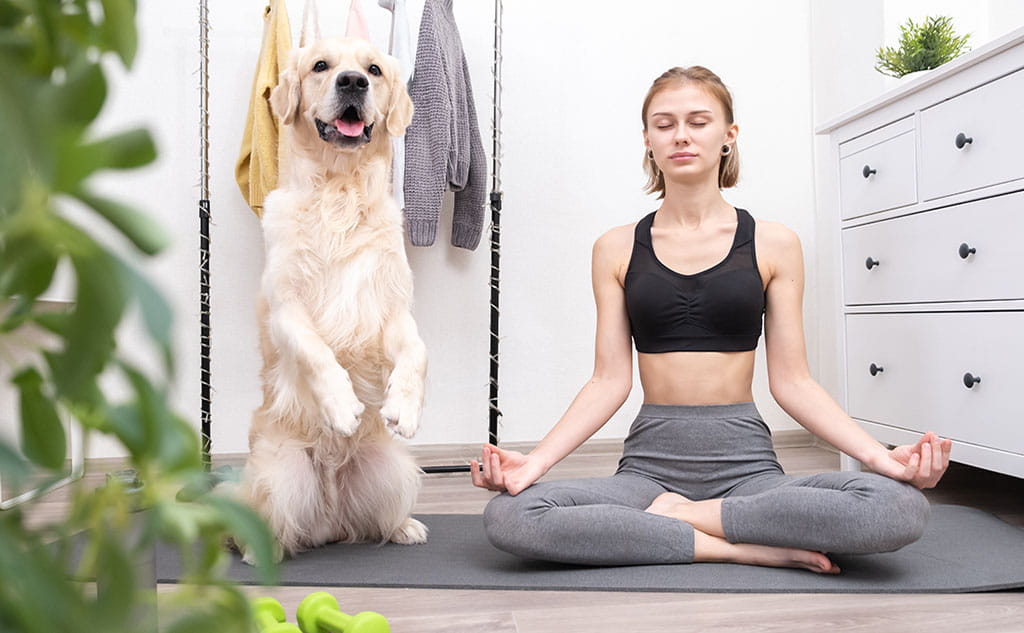 Poor appetite or attempts to eat inedible items, changes in behavior (from apathy to sudden aggression), deterioration in appearance (baldness, dull, difficult to comb hair, drooling), erratic behavior, tremors, insomnia, diarrhea, frequent urination. These can all be signs of stress in a dog. There are many stressful situations in a dog’s life. It may be trips, moving to a new home, overnighting at a pet hotel or with relatives of the owners, visits to the vet and groomer, a new pet or loneliness, noise in the apartment and on the street. Neglecting the signals of a dog’s discomfort should not be ignored, otherwise prolonged stress can cause serious harm to the pet.

The dog is breathing heavily

A dog may perceive the owner’s arguments as aggression, become agitated and breathe heavily. Sometimes all it takes is a change of tone or a little less talking to calm the animal down. Not paying attention to this and raising your voice or gesticulating intensely every day can lead to irreversible changes, up to and including the appearance of seemingly gratuitous attacks.

Stress can cause the animal to go into a stupor and stop responding to any stimuli. This is an extreme degree of stress that requires immediate medical attention. Dogs usually become sedentary, lose their appetite, don’t want to play, and withdraw into a corner. Sometimes they whine monotonously. Other animals become restless, make repetitive movements, run around in circles, bark shrilly, and may show unexplained aggression.

Shaking it off for no reason

Animals shake off their coats after sleeping, lying in one place for a long time or bathing. In the same way they try to get rid of parasites, dry leaves stuck to the coat. When these quite understandable reasons are absent, but the animal nevertheless has a habit of frequently shaking off, it may be a kind of reaction to some stressful situations, when the dog is surprised, puzzled or indignant about something. For example, a pet may react in this way if its bowl contains food that it considers unpalatable instead of its favorite treat.

Rolling on the back, scratching, licking, chewing the skin

There is more to this manifestation of emotion than meets the eye. The fact is that the release of adrenaline in dogs is often accompanied by skin itching, which the animal tries to cope with, rolling on the back, scratching or biting nonexistent fleas. Sometimes this leads to extremely negative consequences in the form of perpetually scratched, inflamed skin, on which microorganisms easily reproduce. But if your dog’s owner is familiar with his habits, he or she will have no trouble figuring out what is causing the next itch. That is, if the dog has not had any excitement or fleas or other parasites in recent minutes, you need to think about other causes.

Both dogs and cats occasionally eat grass while walking outside. In this way, some replenish their vitamin reserves, while others get rid of the hair ingested during licking. However, experts believe that there is another reason for dogs – stressful situations. Some think that a dog suffering from negative emotions by eating grass is just trying to distract itself from stress and unpleasant thoughts. Others believe that dogs are comforting themselves by choosing sweetish grass stems.

This way of expressing emotions is characteristic of certain breeds of dogs. However, excessive salivation should not go unnoticed. The excessive drooling can be a sign of joy or an indication that the animal is frightened or that something or someone is causing him extreme displeasure.

As a rule, it is about yawning and licking. This is how dogs apologize for accidental misdeeds, show sympathy, and ask for treats when interacting with people. But such overactive signals may indicate a high level of stress. Cynologists think it is the dog’s way of calming himself down after an experience.

What to do if the dog is nervous

If you find signs of stress in your pet, do not panic. You should:

One way to help your pet cope with anxiety at home is to give them a sedative based on natural ingredients, such as Kinpur Natural Pet Calming Oil.

The main effects of a course of treatment:

Administration of the drug minimizes the negative effects of stress for particularly susceptible pets. It is also used for aggression, fear, agitation, incessant barking.